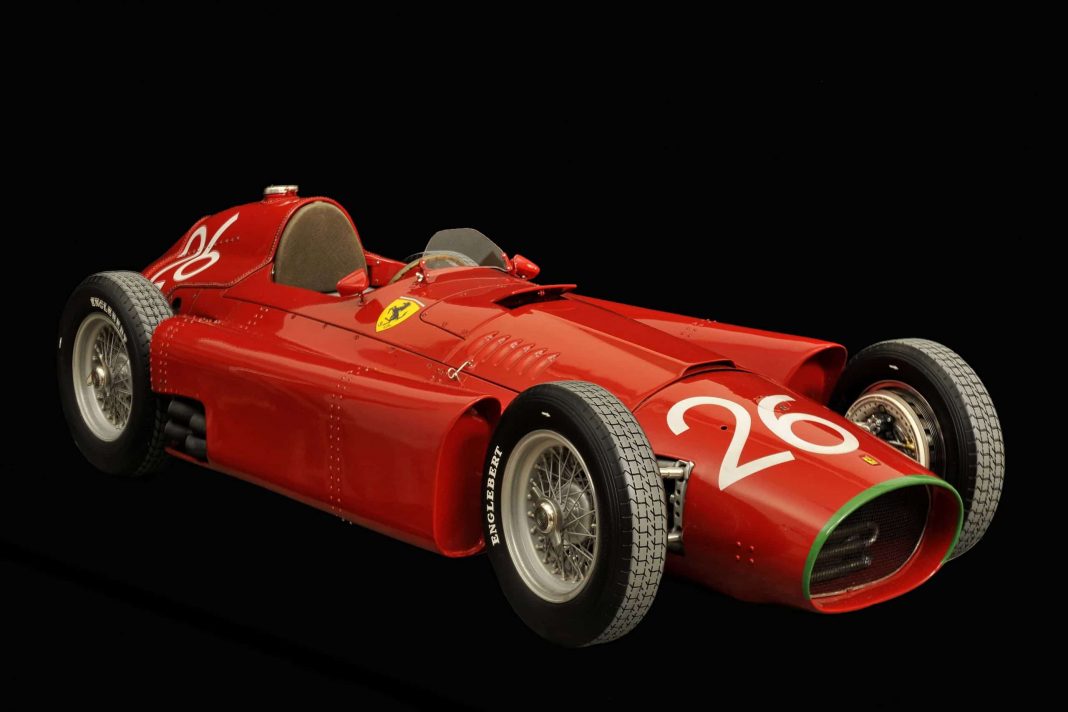 When Lancia withdrew in 1955, Ferrari inherited its material, putting the modified D50 on the track for 1956 and, above all, a driver of Fangio’s ability. The Argentine returned the world championship title to Maranello at the end of an extremely hard-fought season. Juan Manuel Fangio had three victories, taking the drivers’ championship thanks to the generosity of Collins (who won two races). The Englishman gave him his own car for the last race at Monza, allowing him to come second and fight off Stirling Moss’s challenge.

The car (designed for Lancia by Jano, who continued to perfect it for Ferrari) is characterised by the two side tanks originally for fuel, but then reduced to the sole function of wheel guards. It also has a trestle-type chassis, where the engine is part of the resistant structure.

Clear and insatiable individualism was Juan Manuel Fangio’s main characteristic. The Argentine driver was appraised and feared by his colleagues and adversaries alike.

Juan Manuel Fangio was his own infallible manager – a bad habit, we’d say today – and although he always drove the best cars, winning five Formula One World Titles, Enzo Ferrari never took him into his heart.

Juan Manuel Fangio started his career in Argentina, where courage and physical strength were the crucial attributes on the difficult tracks of South America. In the late 40s Fangio came to Europe, where he was already known as a very fast and intelligent driver and immediately impressed the Commendatore. In winter 1956 he came to Maranello as a three times World Champion, surrounded by several young and talented drivers. With his reluctant and distrustful character, it was difficult integrating him into the Scuderia, where loyalty for the Company stands above all. But there was no doubt that he was and still is the best driver ever. Only Michael Schumacher reached Juan Manuel Fangio, removing the Argentine’s unreachable aura. The season started in January with the Argentine GP followed by several races and victories.

Enzo Ferrari’s investment was bearing fruit with the continuous successes of the Team and the driver, but the team order with two drivers racing didn’t work out too well for a personality that is used to doing everything himself. The Scuderia’s sacrifices were huge, but there was also polemics and Fangio’s tension could be felt on and off the tracks. Bad luck and mechanical problems went along with him until his double-win, in Silverstone and at the Nürburgring. With the exceptional Argentine driver at his best and perfect teamwork, the Scuderia won the Sport World Title. It was the end of the season and of this difficult relationship between the Champion and the Prancing Horse.