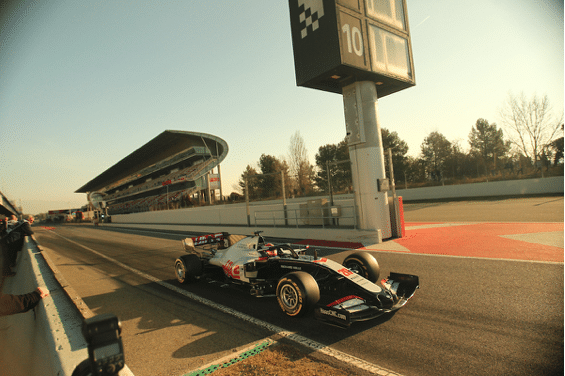 After a weekend off, the drivers (and yours truly) returned to the Circuit de Barcelona-Catalunya for the second week of pre-season F1 testing. Coronavirus was sufficiently threatening to result in the cancellation of the annual mobile telephone conference in the city, liberating what had hitherto been expensive and scarce flights and rooms.

A slightly different week insofar as Ferrari finally got into their stride with Vettel topping the times on Thursday, in contrast to a very weak second day for Mercedes whose car struggled to complete more than 14 laps in one stint due to oil pressure issues.

‘Tracing point’ as the pink Mercedes has been nicknamed, continued to post strong times. Both drivers appear incredibly pleased, in contrast to many of the other drivers and teams who shrugged their shoulders when the team said they had been taking many photographs and echoed the 2019 Mercedes design philosophy from that alone. Some predicting protests from McLaren and Renault whilst others forecasting a podium in Melbourne? Stranger things have happened…

Robert Kubica as third driver in the Alfa was fastest of all on day one this week albeit In qualifying trim. How he managed to drive the car down the main straight and also raise a single finger to Claire Williams as he went past her garage is still a mystery. He will certainly keep Giovanazzi honest given that Robert brought Orlen with him from Williams as sponsor.

Red Bull continued to post a series of long runs and consistent times with both drivers, Albon looking particularly chirpy. I feel sorry for Alex as he didn’t get as many laps in as Max and ended the week sitting next to me on the flight back to Heathrow… poor chap!

In summary, the big surprise from the test seems to be (T)racing point, with many pundits expecting the pink cars to be mixing in the top 3/4. McLaren have had a solid test and appear to have a strong package with Sainz Jr topping Friday morning’s times in the early stages, so let’s hope that the Woking squad can be up there too.

Ricciardo went hell for leather on a qualifying set up on Friday morning but the best time on the day belonged to Bottas who also posted best time of the test.

The midfield battle will undoubtedly be led by the orange and pink cars, with Williams confident of mixing it alongside Alpha Tauri and Renault. Sadly, the wooden spoon award seems to be heading from Grove to Banbury with a very poor showing by the Haas team. Whether the car is underdeveloped, or whether K-Mag and Grosjean simply cannot get to grips with the car remains to be seen. Either way, this could well be the last season for them and several other drivers.

Lastly, spare a thought for Alfa Romeo team boss, the hugely likeable Fred Vasseur. One of his new sponsors commissioned a commemorative helmet for presentation to him, with the names of every driver to have raced for the Italian marque in F1. A really nice gesture, somewhat ruined by the mis-spelling of the great five times champion Juan Manuel Fangio as ‘Fandigo’!  Fred’s tact was commendable…